Unruly eyebrows don’t stand a chance in these capable hands

If eyes are the windows to the soul, then I’ve got a very shabby pair of curtains. My individual brow hairs grow sparsely, in different directions, resulting in a look that can only be described as motheaten.
I’ve tried tweezing, pencilling, brow powder and threading, in my attempts to lick them into shape, but nothing has resulted in the perfect arch.

So, when I heard that Edinburgh’s Zen beauty salon had launched a new treatment called HD Brows, I thought I would present them with their ultimate challenge – me.

This method has been designed by permanent make-up expert, Nilam Patel, aka the Brow Queen, and the publicity bumph features images of glamorous women who appear to be channelling Dita Von Teese or Vivien Leigh. It’s a very groomed look, no tadpole-shaped over-plucked brows here.

Fiona, the salon director at Zen, has trained under Patel in London, and is evangelistic about this new technique. It consists of seven steps: tinting, waxing, tweezing, threading, mineral make-up and pencilling. I’m led to a chair at the front of the salon, by the window, where there’s the best natural light (although, if you’re too shy, they can do the treatment in one of their downstairs rooms).

HD Brows is especially unusual, in that they dye the skin, rather than the hair. They also take account of the shape of your face, so they can “design” a brow that suits.

Fiona gently dots on a little dark brown paint, which should colour my skin for a couple of weeks. She then gets the eye-watering waxing element of the treatment over, before setting to work with the tweezers. Then, all the tiniest hairs that remain are whisked away using a threading technique.

The whole process takes just over half an hour, toward the end of which I get the impression that Fiona is a perfectionist, as she snips at my brows with a tiny pair of scissors. The finishing touches include pencilling in any gaps and applying some mineral foundation to disguise the surrounding blotchy skin.

The result was a very grown-up arch, which makes me look like more of a high-maintenance woman than I am.

According to them, you should come back for ongoing treatments, so they can tame your brows over time and perfect the shape. Fiona recommended I use a brow gel, to train the hairs to lie down, and I’ve been following her advice. Two weeks later, and my “eye curtains” are looking a whole lot neater.

This article was first published in The Scotsman on 2 October, 2010 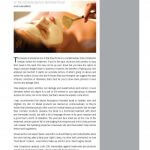