Further to our blog post about the stars dropping in to the new salon at Hanover street for treatments, (‘Cheryl’ and ‘Nancy’ from Hollyoaks, and Sam Faiers from The Only Way is Essex), we thought we’d mention some of the stars who’ve recently visited the Teviot salon for treatments.

Comedian Russell Kane (winner of last years Fosters Comedy Award) was in at the Teviot Place salon for a massage, which he described as “mind blowing”.  He liked it so much he immediately re-booked and bought a voucher for a friend! He was in Edinburgh for the festival performing his show ‘Manscaping’, which explores the ridiculous state of masculinity in the modern world.

We also had British acting legend Simon Callow (star of cult movies such as Four Weddings and a Funeral, Shakespeare in Love, etc) in  for treatments at Teviot Place. He was in a one man show about a transvestite and needed us to make him beautiful (and when I say us, I mean our therapist Becky). After his waxing he said “she’s a brute that girl, a brute!”  Beauty is pain Simon, beauty is pain.

Well it’s been really eventful during the festival month! We’ve enjoyed catering to the stars, and hopefully they’ll come back to us for their treatments next August. 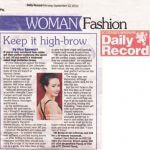